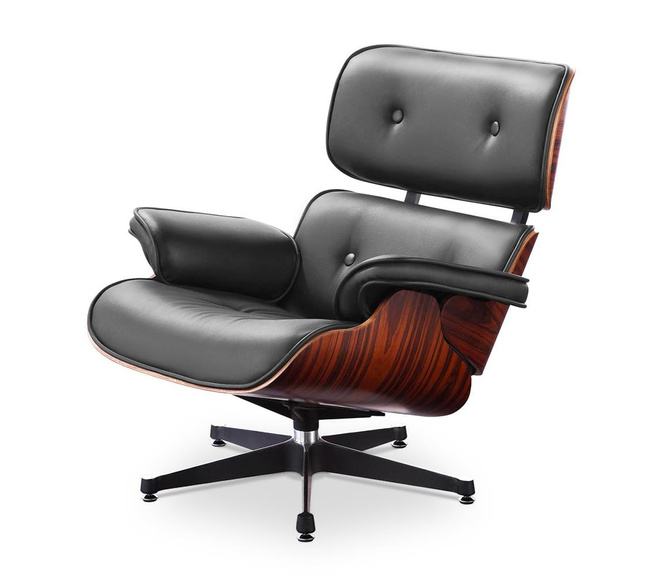 If there has ever been a chair that invites you to sit down and relax, it is the Eames Lounge Chair and Ottoman. The chair was designed by husband and wife Charles and Ray Eames’ design team and went into production in 1956. It immediately became synonymous with luxury and style.

The history of the chair and ottoman dates back to the late 1940s when Charles and Ray Eames took on the challenge of redesigning the concept of the 19th century English armchair. The Eames chair was designed as a fresh, modern version of the comfortable, clumsy armchairs found in the elite gentlemen’s clubs. Charles Eames once said he wanted to create a chair that had “the warm, receptive appearance of a well-used first baseman glove”. The chair should be very inviting and extremely comfortable, but still look classy and light. The Eames Lounge Chair first appeared in the spotlight on the Arlene Francis Home Show, which aired on NBC television in 1956. It was an instant hit.

The chair was inspired and produced for Billy Wilder, famous Hollywood director of Sunset Blvd., Some Like it Hot and The Apartment.

Herman Miller furniture company saw the potential of the chair and ottoman and began commercial production a few years later.

The shape of the Eames Lounge Chair and Ottoman is clean and modern, but not entirely minimalist. Its appearance is particularly well illustrated by Ray Eames himself, who wrote in a letter to her husband that “the chair looked comfortable and undesigned”. The shape of the chair with its famous curves has gained worldwide recognition and has been praised by design critics. In fact, it became part of the permanent collections of the New York Museum of Modern Arts and the Art Institute of Chicago. However, this interior design masterpiece is not intended solely for exhibition. It is still being made and is available in stores today.

The shell of the chair is made of curved plywood that curves around the person sitting in it, giving the chair its famous cozy, intimate feel and offering “a special refuge from the stresses of modern life”. The plywood used for manufacturing consists of seven layers. Dry plywood sheets are laid alternately together with those covered with glue. Crossing the wood grain during the stacking process provides additional strength. Layer sheets are then pressed into the desired shape. The shell is provided with a thin layer of veneer. Brazilian rosewood was originally used to achieve this shine, but it was replaced with more sustainable alternatives in the early 1990s. Customers can choose between cherry, walnut and rosewood rosewood. While only the rosewood has a similar grain pattern to the original Brazilian versions, the chair is also available in many other versions. The shell is divided into three main segments: a seat pan, a backrest and a headrest. The sections are connected to one another by steel couplings. The rubber damper mounts, another item on the couple’s inventions list, are located between the couplings and the shell so that the chair can adjust to the position of the user. The high level of comfort is due to the high-density urethane foam, which is then covered with supple, high-quality leather. Two buttons in each segment give the upholstered parts a tufting and give the chair a comfortable look. The chair leans back slightly and suggests a pleasant, relaxing feeling. It stands on a five-legged base and rotates at the whim of its owner. In order to achieve the absolute heights of comfort and relaxation, customers can combine the Eames Lounge Chair with the matching Eames Ottoman. The ottoman is made using the same materials and processes and is a perfect addition to the chair. 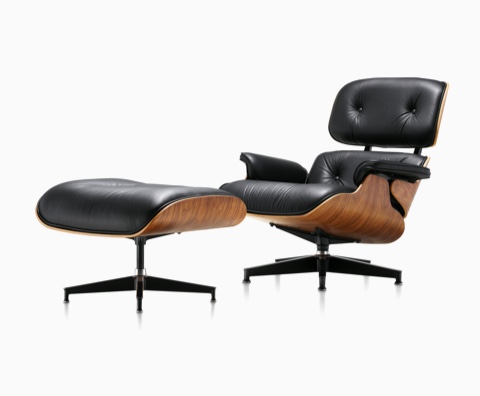 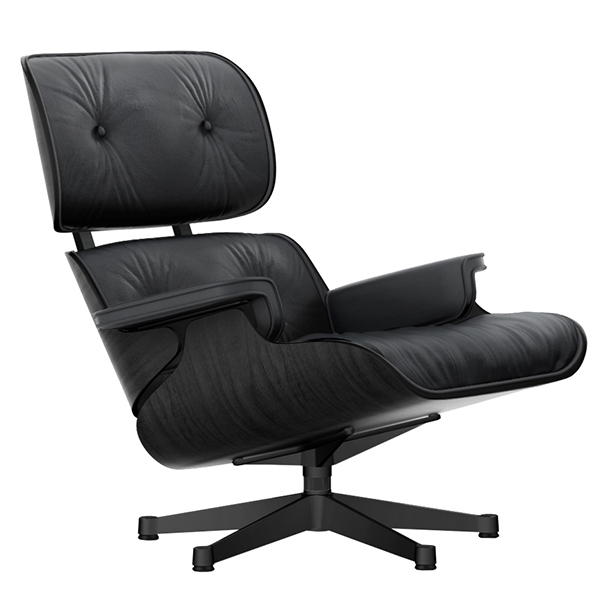 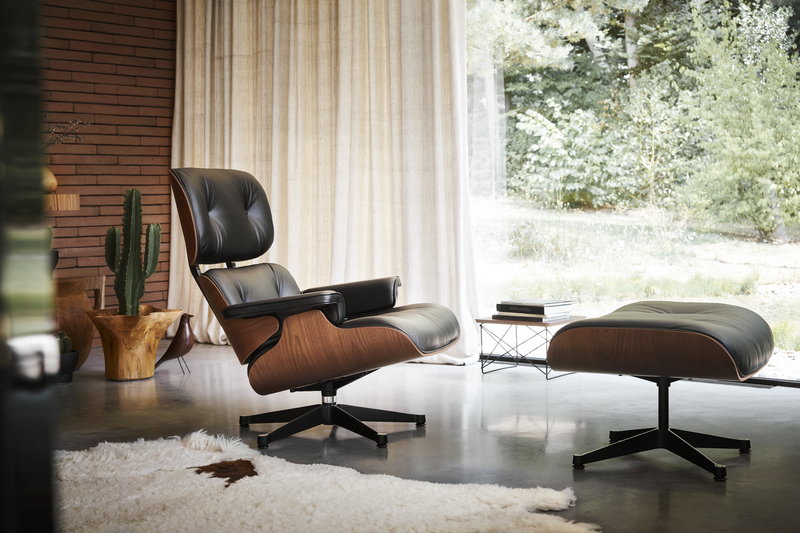 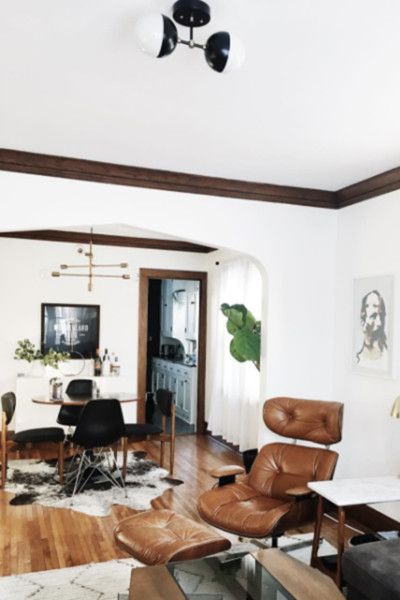 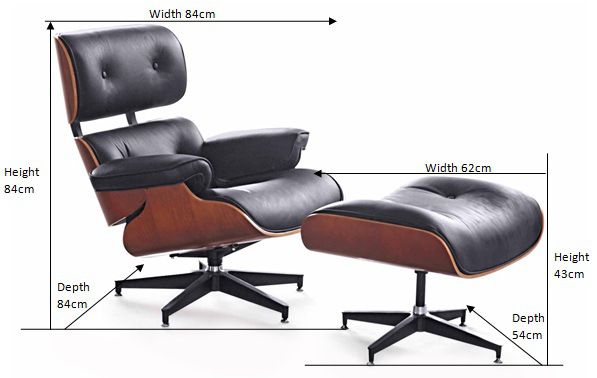 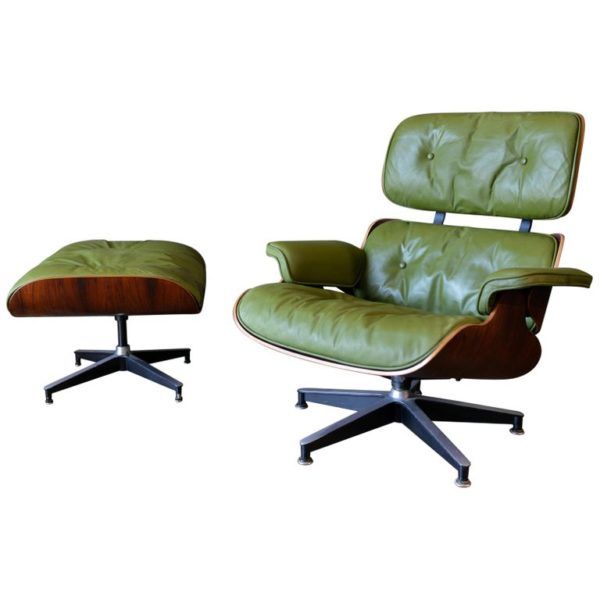 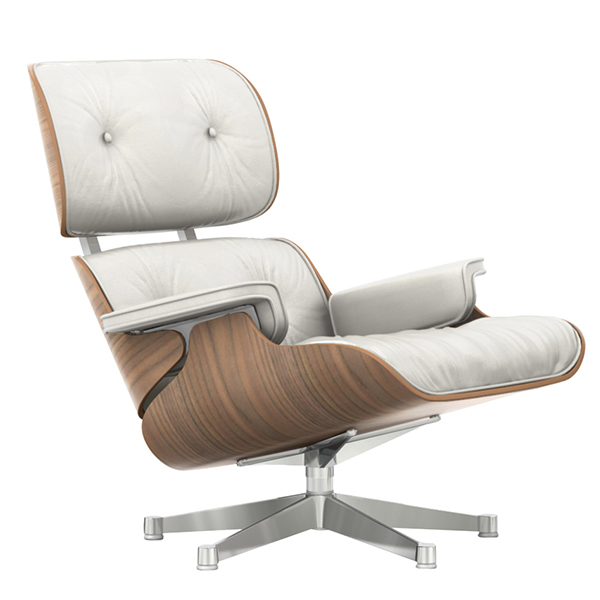